And time for another Monthly Building contest. My fourth one so had to think a bit myself. It's getting a bit darker and colder out here (and warmer for you lucky people on the other side of the earth) but I'm guessing Halloween has spread a bit everywhere. So I want to see Monsters. They have to look organic (not like a mech) atlhough I will allow grey ball joints seeing as Lego only makes them in that colour. They can be cooky, wacky, scary, strange, whatever you like. You can make a Lego representation of an existing monster or make your own creation.

Size does not matter for this competition.

Don't be shy in sharing, even if it's your first MOC, this contest is here for fun and to get those creative juices flowing. Also, if your kids want to take part and make one for themselves, feel free to post those too, always great to see what they come up with.

- your model must be built for the contest, not an existing MOC

- two photographs per entry only - it helps the thread load better/at all! However feel free to upload any extra images to Flickr etc. that aren't for your entry.

That is a surprise, I'll try to find you something cool.

Any questions? Anything dubious? PM or leave a message below.

I look very much forward to see what you all come up with.

-- Does it look fun to come up with an idea yourself? Volunteers can speak up here. 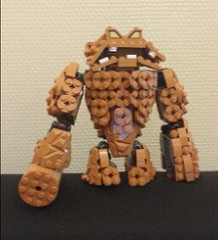 This is an example of a cool monster I like - from TLBM :)