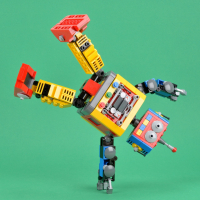 At next month’s Toy Fair in New York, LEGO will unveil the SHIELD Helicarrier set.

In the 2012 film “The Avengers,” the Helicarrier is a gigantic aircraft carrier capable of flight that serves as a base for the defense and intelligence agency S.H.I.E.L.D. (The new Lego set isn’t tied to the upcoming sequel, “The Avengers: Age of Ultron.”)

The Helicarrier also comes with 12 microfigures to scatter around the carrier’s enormous deck and interior. (It’s that big.) The microfigures are Nick Fury, Hawkeye, Captain America, Iron Man and eight SHIELD agents.

Control center is hidden underneath the runway in the middle of the Helicarrier.