Paperballpark Near ManchesterMember Posts: 4,244
October 2021 in Collecting
There's many discussions about how to sort collections of loose LEGO, but most of them concentrate on LEGO collections owned by AFoLs.

I don't think there's been much discussion about how to sort a child's LEGO collection.

Our little boy has - for a child - a lot of LEGO. The problem was that it was mostly stored in a few large boxes which were full to the brim. This meant he not only didn't really know what parts he had, but he also couldn't really dig deep enough to find parts. This didn't help his imagination.

Hence the need to sort it all, so that he knows where parts are, and can easily find them in a system which makes sense to him.

Unlike me (and, I suspect, a lot of AFoLs), hyper-sorting parts into myriad boxes wouldn't feed his imagination and help him build. He needed a system which sorted his bricks so he can find them, but didn't sort them too much so that it starved his imagination.

So I came up with the following 16 categories, which are stored in fabric drawers that fit into Ikea Kallax units (a set of two drawers in each cube):

He's been bought a lot of 2x4 bricks over the past few years (approx 3000-4000), hence having a separate drawer for those. Otherwise, every part - literally every possible part - logically fits into one of those drawers. If it doesn't, it goes into the 'other' drawer (which has a small container in it for the smaller parts)

I'd be interested to know how others sort their children's LEGO collections :) 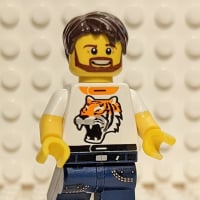