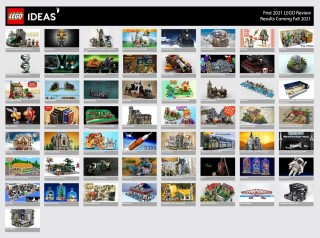 LEGO has just made it known that the results of the first 2021 Ideas review will be published tomorrow, most likely at 2pm BST / 9am EST.

You may recall that a whopping and unprecedented 57 projects amassed 10,000 supporters during the period concerned, so I am sure it has not been an easy task picking one, or more if we're lucky, from the selection.

The Ideas pipeline is quite long already so, at the current rate of 4 or 5 sets a year, whatever's chosen probably won't be released until 2023.

Here's what we are still awaiting:

View all 57 projects after the break and, in time-honoured fashion, let us know your predictions in the comments.

© 2021 Brickset.com. Republication prohibited without prior permission.