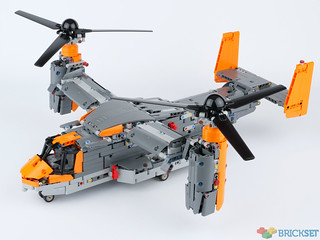 Around 400 of the craft have been produced since 1988 and it's currently in use by the US military and the Japanese self-defence force.

42113 Bell-Boeing V-22 Osprey was due to be released on 1st August but has been cancelled. However, many shops in Europe and elsewhere have received shipments and are permitted to sell them. If you can't find one locally you will do so on eBay but not BrickLink, because it's been removed from the catalogue there.

I will not be discussing its suitability as a LEGO model, or the company's decision to cancel it at the last minute in this article.

What I will say, though, is that it appears that it was cancelled not due to external pressure, but because it's fundamentally flawed.