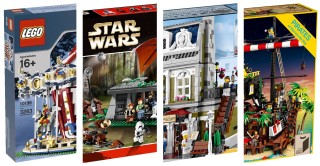 The last two quarter-final bouts have just ended so I can now reveal the results as well as the make-up of the semi-finals.

The two contests fought yesterday were, in bold:

Find out which sets will join Parisian Restaurant and Old Fishing Store in the semi-finals after the break...