CCC UKMember Posts: 20,363
February 2020 in Buying & Selling Topics
OK, it's a clickable title, they are not banning licensed figures and so on. But they have ended the use of the terms light flesh / flesh / medium dark flesh and dark flesh. Instead these are now variations of nougat. Other official Lego colour names have not been adopted.

So no more fleshie minifigures, they are now nougaty instead!

It will be interesting to see if BL changing their colour names will change the use of the well established terms in AFOL circles. 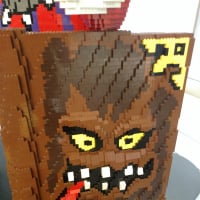