Explanation on the inventories of 1972 era Samsonite sets

LusiferSam MontanaMember Posts: 486
September 2019 in Collecting
This is a post that has been several days in the making. It's a bit of an obscure topic, so hope you guys find it interesting. This is an extra long post, so I'm going to have to do it in three or four segments.  I've done a lot of proof reading, but there still maybe some typos, sorry about that.
I finally been able to crack the code on what has been a bit of a standing mystery for me, that is the inventories on the 1972 era Samsonite sets. The so-called Imagination Sets, 101, 102, 103, 104, and 105, along with Sears, JCPenney's and some promotional sets were made with a very different philosophy in mind then earlier sets. They were basically dumping grounds for Samsonite to clear out their inventory of Lego elements. I've long felt there was a pattern to these, but have been unable to figure it out. Until now.
For some background, Samsonite was putting very little effort into these sets. The licensing agreement with Lego was coming to an end and they were looking to liquidate their remaining inventory. Minimal effort was being put into these sets as is evidenced by their lackluster nature. A way to put further minimal effort into them would be to make them highly formulaic. It is this formula that I have been working on cracking.

A couple of years ago I bought a 103 set that was partially sealed. The box was open but there were four bags of basic bricks, two were sealed and two were open. There were also three other bags.  One was taped closed and the other two had the same type of tape stuck to the side, but were otherwise open.  The two sealed bags of basic bricks looked to have a very similar inventory of bricks and were very close to having the same inventory as the open bags. This got me thinking; what if they were identical? Or more importantly what if the bags had the exact same number of pieces in them? 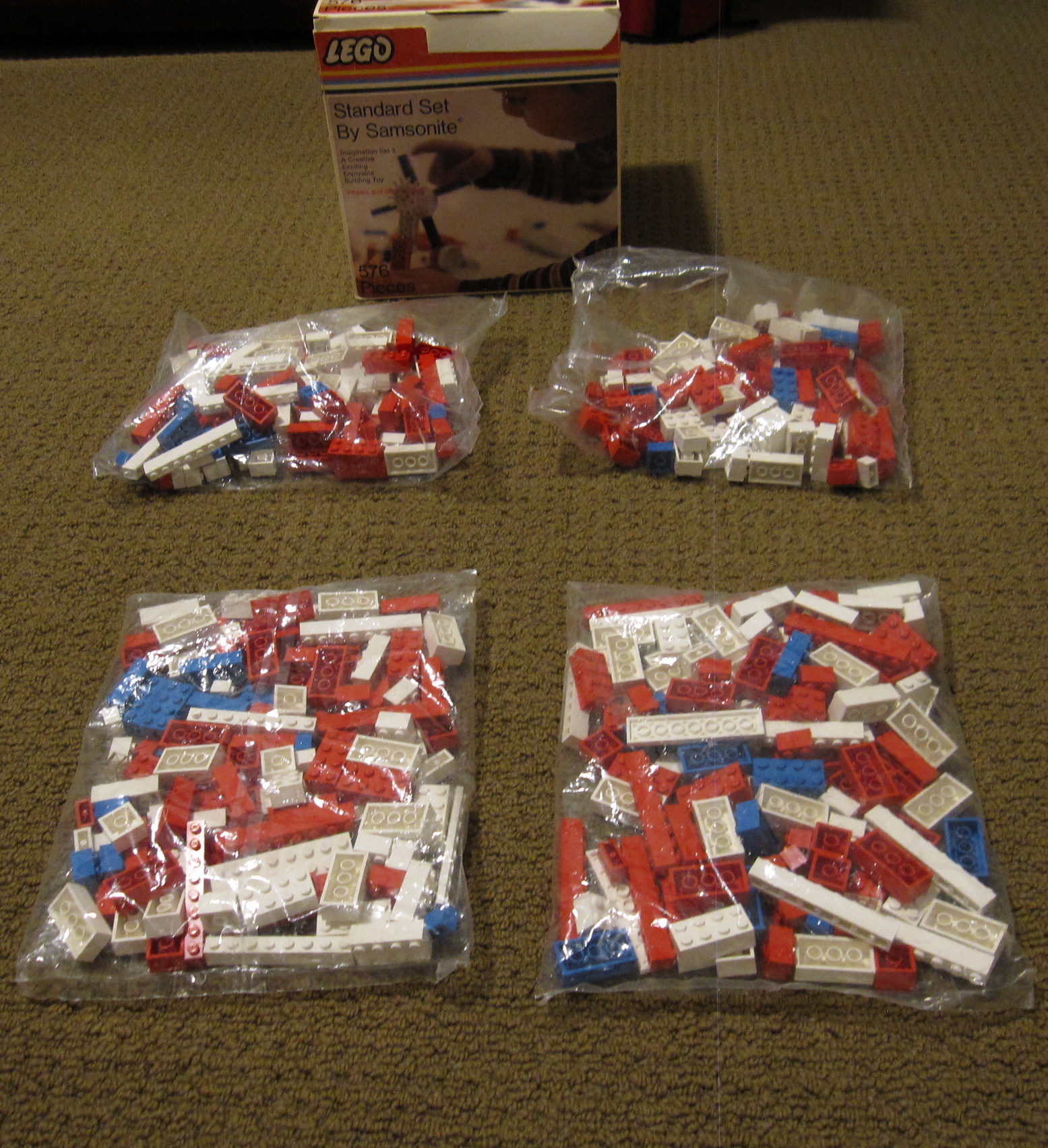 The bottom of the box for each of the Imagination Sets lists a rough inventory for each set. The inventories list the number of basic assorted bricks, base plates, roof pieces, windows and doors, wheels and their accessories, and gears. Looking at a couple of these sets there seem to be a bit of a pattern. At the time I couldn't make the numbers work as I had too little information to work with. With limited information I put these away and left the problem for another day.

I was recently spurred to revisit this issue by a recent eBay listing. There's a 101 set that had an open box but sealed bags, similar to my 103 sets. This eBay listing shows two bags of slope, window and door elements in bags that are taped closed rather than heat sealed. Interestingly this is the same type of tape that is on some of my open bags in the 103 set. This is a strong indicator that these bags and the tape is original. Using the sealed bags as a rough guide and looking at the basic inventories of all 5 Imagination Sets I was able to devise a workable system.