My son is trying to save for Rex Dangervest's Rexplorer. He's doing pretty well but he's still a long way from the target and because it's taking a while to save he's been getting a little upset on and off (he's 7).

I'm trying to lower his expectations by making him earn the money doing jobs, save his pocket money or sell stuff. You know, ensure that he learns that waiting for things is a good thing, the value of money, not expecting to just get stuff (and that we can't spend all our money on LEGO, however much we'd like to!).
So, we've been trying to help him by selling some of his old toys on ebay to try get to the magic number.

Long story short:
He still has the duplicate #75927 he got for Christmas (sealed box in v.good shape), that we're trying to sell. 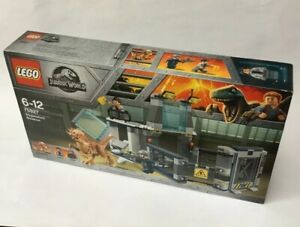 I think he'd be happy with £25 + P&P for it if anyone was interested, would be happy not to give the fees to ebay.

Apologies for the sob story. Offers via PM only please, thanks for looking.