Anyone else disappointed by #21036 Arc de Triomphe?

tomalphin Member Posts: 250
August 2017 in Building and Techniques
I've built almost every set in the LEGO Architecture series, and I'm always excited when a new set is available for the first time.  While I really enjoy the variety that the new "Skylines" sets have added to the Architecture range, I don't like that we haven't been seeing quite as many sets based on a single standalone buildings since they were introduced.  That's why I was pleased to here that we would be getting three new standalone models this year.

I admit that I was a bit underwhelmed with the photos of the Arc de Triomphe set when they were released - I didn't like that intricate carved details were reduced to a single statuette.


OVERVIEW:
The model contains 386 pieces, and has an MSRP of 39.99$. (This seems too expensive since it contains small and basic parts, and we have been seeing well under .08 cents per piece in recent additions to the Architecture series.)

Before getting into the details of the mistake on the cover and in the instructions, I do want to call out a few of the more interesting techniques. 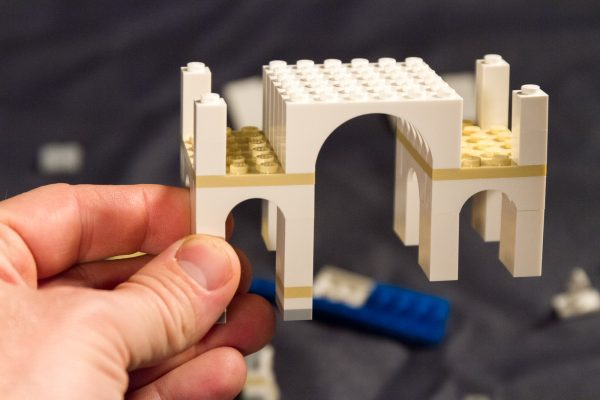 The arches slide over the 'Carved' sections containing the statues, which are offset from the rest of the model.


I like how you assemble the panels containing the statue which are 1/2 stud offset from the base as a single assembly.  This makes the construction process simpler. Assembling the top section of the corniced roof.


I also liked seeing how the final level of the roof came together.  Brackets and headlight bricks are used to good effect to ensure everything lines up correctly.


THE MISTAKE:
When trying to build a model using only the photo on the cover, it's critical that the model was assembled correctly before taking the photos. There should be a gray plate beneath the white plate in the tiny sliver of the photo which you can see behind the archway.

The same error is reflected in the instruction booklet.  They ask you to assemble four identical modules and attach them to the baseplate built on previous steps.  The module which goes in the rear-left corner is shown without the layer of gray plate on the bottom.  (My guess is the software they use to design the instructions doesn't prevent you from placing one brick on top of another - the module was probably copy/pasted and accidentally pushed one plate too deep.) As you can see, the left module is missing the gray plate.

To be fair, it's not a major mistake in the instructions, and people who follow the instructions closely probably won't notice this mistake as they would simply snap all four modules into place as indicated.


Closing Thoughts:
I have enjoyed visiting Paris, and I agree that the Arc de Triomphe is an important landmark and a great example of Neoclassical architecture.  Unfortunately, this is not my favorite recent addition to the LEGO Architecture series (especially since most of the recent sets have been excellent.)  I would have liked to see them make the model a little larger so they could have included additional detail in the carved panels surrounding the building.

Further, the set is overpriced at 39.99$ for less than 400 pieces.  To make matters worse, the set doesn't include any especially large or interesting parts to add to your collection.  If you can find it for a steep discount, it's not a bad model, but I'd strongly recommend other models in the series (Louvre, US Capitol, etc...) if you haven't tried them already.

What do you think of the model?  I'd love to hear your thoughts!


P.S. For additional photos of the build, and more involved discussions about Form vs Applied Decoration in Architecture, feel free to read the longer review I posted to http://brickarchitect.com/2017/review-21036-arc-de-triomphe/