Ylusie Puerto RicoMember Posts: 12
June 2017 in Marketplace
State: USED
This has to be shipped and handled!

Hello everyone! Im new to this selling Lego business but all i know is i want to sell my Lego Collection.
I have to say at first that there that some sets are not complete but i think the pieces are in my pieces bags. Its NOT 100% guaranteed though but there are lots of pieces in there.
Another thing to say is that some of my lego figures have yellowed parts (And the clones some have blue marker paint) Nothing to worry about if you know how to get rid of it. (They were stored and not used once built. They were also in an area that they could get hit by balls and stuff so thats why some sets have parts wich are not built in)
The sets have Instruction books, ones books are better than others but they are all in good condition! This collection comes with the minifigures, and with minifigures from "Knights Kingdom" sets, Those sets might not be around, might be pieces of them in the pieces bag though.
So the question is how much you want for all of this? I want $500.00 dollars for it or give me your best offer! PLUS $15.00 Shipping and Handle
Accessories are included. Blasters, swords ect...
Not selling any separately.
Also adding 7 STAR WARS Action Figures lol
There are some other "Blocks" in it with Non-LEGO minifigs aswell. The blocks are in another bag apart.
By the way: All of them are Star Wars sets! Minus the two Lego Pirates sets in there. There might be some pieces to "Knights Kingdom" sets in the bags so i will throw those Set instruction books in them for you (they are in bad shape but redeable. Talking about the "Knights Kingdom" ones.)
Here are the sets:
REMINDER: Not all have their pieces but theres a chance they are in the pieces bags. Not all are built.
LEGO: STAR WARS
7670-2 - Hailfire Droid & Spider Droid, Clone Wars White Box
8018-1 - Armored Assault Tank (AAT)
7675-1 - AT-TE Walker
8015-1 - Assassin Droids Battle Pack
8014-1 - Clone Walker Battle Pack
7654-1 - Droids Battle Pack
7655-1 - Clone Troopers Battle Pack
8036-1 - Separatist Shuttle
7749-1 - Echo Base
7666-1 - Hoth Rebel Base (Limited Edition - with K-3PO)
8083-1 - Rebel Trooper Battle Pack
8084-1 - Snowtrooper Battle Pack
8089-1 - Hoth Wampa Cave
8092-1 - Luke's Landspeeder
LEGO : PIRATES
6253-1 - Shipwreck Hideout
6241-1 - Loot Island
So since im new to selling Lego i want to make this simple for me, i will dismount the sets and put the pieces in bags for you, they will be labeled with the name of the set they are from. Any questions post them! 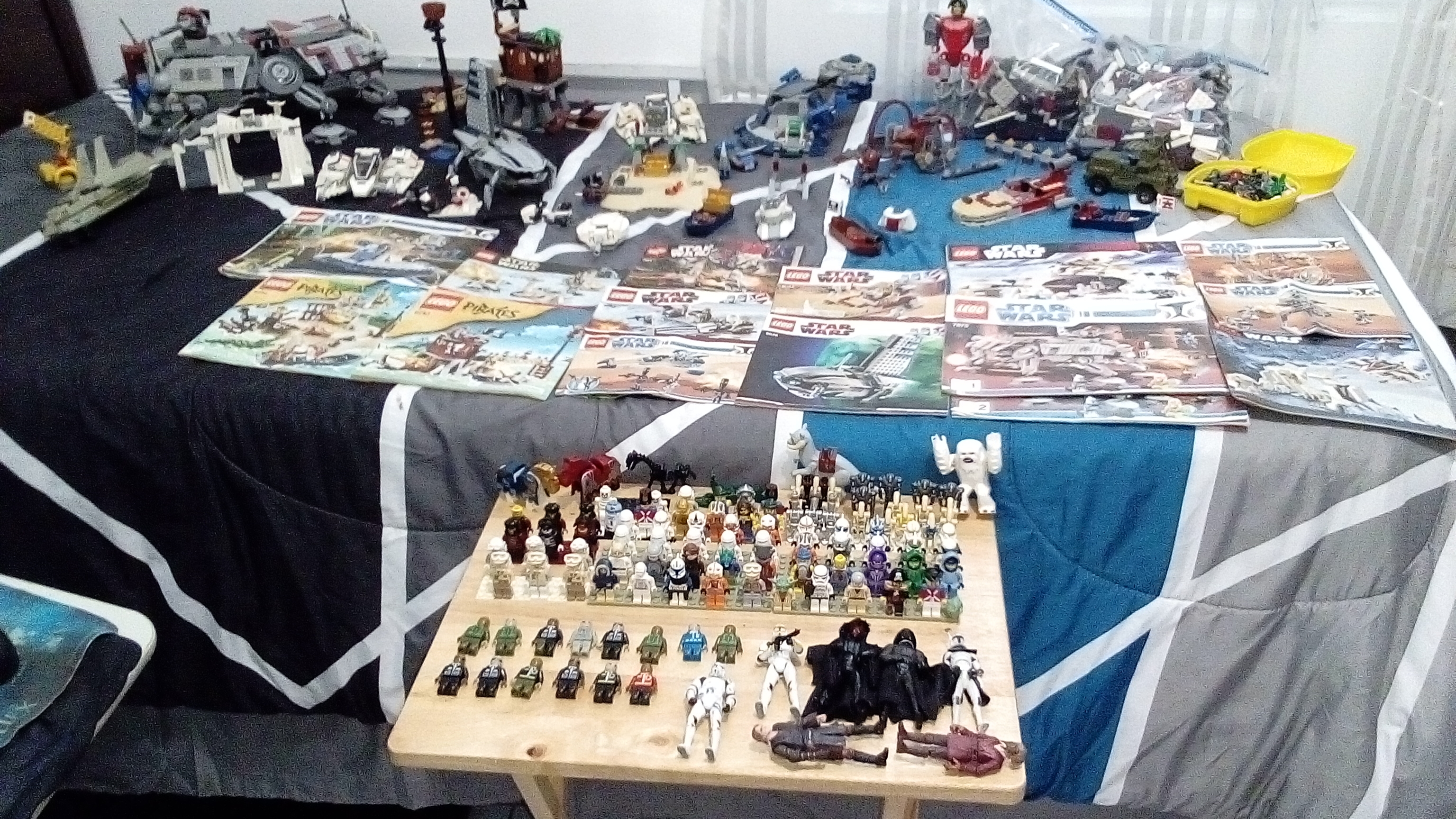