Is this Avengers logo possible to build?

Magma United KingdomMember Posts: 5
February 2016 in Building and Techniques
I've made a little stand to keep Lego versions of the Avengers on, and toyed with making a little Avengers logo to go behind them. I couldn't pull it off, so I gave up.

I've since got the Lego Marvel's Avengers video game, and in the loading screens there is a logo made of Lego that looks perfect! A little... too perfect. 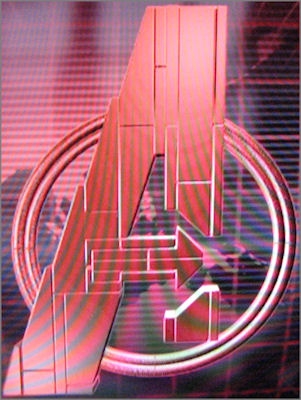 The only pertinent detail you can't really see from this is that the letter is 2 studs thick and the bottom-left part is actually two of part 61409 side by side (Roof Tile W. Lattice 1x2x2/3).

I can build the logo virtually in LDD about halfway up, using two of part 99781 (Angular Plate 1,5 Top 1x2x1/2) to make a slightly fragile-looking horizontal bar, but then it starts to fall apart. Literally. There don't appear to be inverted 2x4x1 slopes, so the two that appear to be base-to-base don't have any way to stick together. At best I can make it so the top part will split in two if left to gravity, and at worst I have two plates with superimposed studs.

Am I missing something, or is this impossible and would I be better off abandoning it in favour of using 2x3x1 slopes (which would make it look a little squashed, but at least do come in an inverted variety)?