I am tired of the dust collecting on my modulars, but so far I have been unable to find a suitable case big enough to display multiple modulars arranged in a "street formation" The price on purchasing a custom-made case is exorbitant. So I have taken it upon myself to build one from scratch using plexiglass on five sides with a high quality plywood base.

It occurred to me that many modular collectors might have run into the same problems… custom made cases are expensive and nothing on the market is designed to be really long, moderately high (20" fits the tallest modular) and 14" deep (deep enough for street space beyond the boundary of the modulars themselves). I'm wondering if anyone here has done this before/ has products or materials to recommend/ would be interested in buying a case from me if I went through with this and made several.

I have landed on 33' inches long, 20" high, and 14" wide as the dimensions used. It is big enough to fit three modulars, plus 3+ inches of street space on the front and corner. The reasoning behind these specs is rooted in flexibility of use/display arrangements, appeal to larger pools of possible buyers (many people only own a few modulars, not all 9) and manageability of shipping options in the event that these things actually become marketable. They will be stackable, but also align-able side by side (spacing between modulars displayed in this fashion from one case to the next would be one-quarter inch) in both street row formations or town square formations (I'm hoping lego makes 12 of these total at least to complete the square.

I'd like feed back of all types from members here. I'd like to get this project rolling. 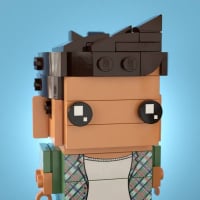