Farmer_John USA - 4,035 Miles from 62 West Wallaby St., Wigan, Lancashire, UKMember Posts: 2,404
November 2013 edited November 2013 in Collecting
My family and I like to collect the mystery CMFs sets that are released roughly three times each year. The mini-posters are placed in consecutive order on a wall in the kitchen for all to look at, and the kids get to pick a newer CMF as a reward for their school performance.

I thought it might be interesting to look at a few tidbits that I could glean from analyzing recent USA eBay sales data on the CMFs. Without going too much into the statistical analysis, this data includes both sealed and opened CMFs. There are some surprising (and not so surprising) facts that came out...

My analysis found that the top 10 average priced CMFs in descending order are:

There's really no surprise that Series 1 is King of the CMFs; however, I was surprised by Grandpa making the list (no disrespect to you Grandpas out there). I guess it might be a good time to pick up grandpas and grandmas before they go higher.

The highest average priced Series CMF is Series 1 (as is obvious), and the lowest average priced Series CMF is Series 7. Keep in mind that Series 1 and Series 2 CMFs sold for $1.99 while all future Series CMFs sold for $2.99 (unless you were unfortunate enough to purchase yours at TRU...then suffice to say it was likely higher than $2.99). The attached graph shows the average current prices in the USA for each series. I will be glad to produce more statistical info as requested regarding the CMFs as time allows. 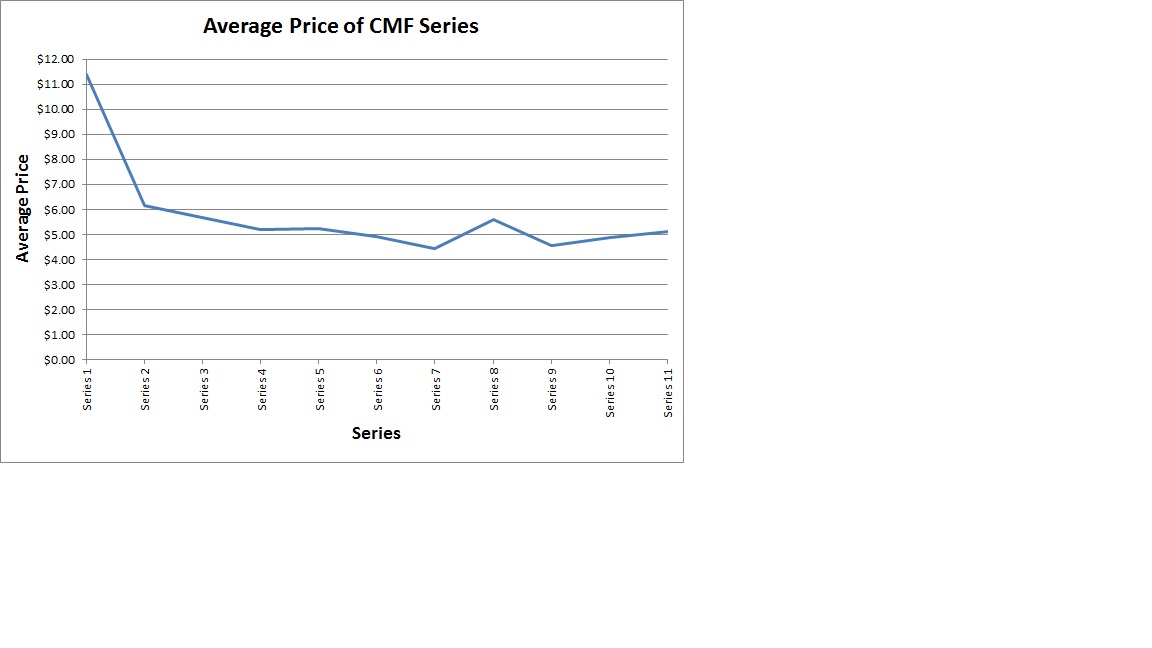